Of Light and Air: mixed media works by Andrew Young

Andrew Young’s delicate and precise works of hand-painted paper collage explore the fields of biology and the fine arts, reflecting on the human desire to collect, catalog and control nature.
The mixed media works of Andrew Young hearken to a time when natural historians were artists as well as scientists. As with Thomas Cole and the Hudson River School, there is an impulse to find reverence with Nature – as the known is supplemented with the imagined, and the banal becomes beautified. However, Young is aware that all collections for study are inevitably connected with the separation and disappearance of what is cataloged. His paint materials are hand-ground, often mined and processed directly from the earth, but the natural forms he depicts come purely from memory. More than a sensory imprint of “plant” or ground, they are abstract, even ghostly. Painting is at once a physical, tactile endeavor and a search for a lost sensibility: a venture that conjures our intricate and elastic relationship to the landscape.
The artworks of the exhibition were grouped in themes, with wall text describing each: 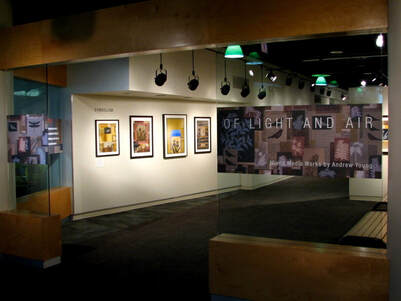 Symbolism -
Birds in silhouette, and plants rendered in centered or symmetrical compositions, lend an emblematic – almost iconic status – to the subjects. Young composes these forms from memory and sees the images as symbols for the human soul, our aspirations and longing, as well as our complicated relationship to the natural world. Birds, for example, quite literally do what humans can’t but have aspired to do for generations: fly. Birds are, in a sense, mediators between ground and sky, the terrestrial and the spiritual, earth and the heavens. Plants, especially in their seasonal nature, represent the ephemeral, mortality and renewal.
Variation and Evolution -
In the natural world there is an embedded genetic code to cause mutation and variation within generations. This is the evolution that drives the diversity and adaptation of species. Using paint with hand-ground powdered mineral pigments, some of which Young gathered from areas as diverse as salt mines in Pakistan to the coal fields of northern Illinois, no two elements in these collages are alike. The impulse to collect natural materials and to develop a vocabulary of related forms – sometimes as simple as a geometric field of color – demonstrates an intimacy and connection to nature and all its subtle variations over time.
Geometric Abstraction in Nature -
Young is influenced by how scientists catalog and represent the natural world. For example, parts of a flower or a plant are often illustrated as if flat on a page, and diagrams are frequently used to show geologic sedimentary strata. Objects and events in nature are depicted in code, laid into grids, and understood in total as a “sum” of their parts. Young believes that these traditional methods of presenting nature - in their very attempt to understand specific relationships - can unintentionally create distance between the observer and the observed, and at the same time reveal the language of how we represent our environment.
Photographic Representation -
Some of the works incorporate vintage photographs of nature. Young explains, “I am most intrigued by the picture postcard format as a way of ‘capturing’ a piece of the natural world once observed, then transporting it to another location for reference, memory or sharing …It’s another level of abstraction…” Young juxtaposes these photographic elements with other abstract natural forms to represent both nostalgia and dislocation between the viewer and the natural experience.
Pattern/Repetition -
Order in the natural world can be elusive. Young views the grid form as a lens through which we see the world, relate to the world, and organize ourselves within it. It is the language of our comprehension. Science – and to a degree, design – attempts to order our observable surroundings and make sense of them. The “grid,” – for instance, charts and graphs – is most basic to the scientific language of our discovery, comparable by appearance to pattern and repetition in the design of our living spaces.
Writing and Reflection -
Some of the pieces you see here incorporate text along with the other collaged elements, and often in different languages. These texts were not intended to be wholly literal in meaning, but rather to show the beauty of written language – more specifically, how we reflect on our position in the world and communicate it with others. Incidents of hand-written text are excerpted from Thoreau’s Walden. As birds have “calls,” we have voices and writing to create understanding and community among us.
Appropriated Forms -
Throughout history, art and architecture have incorporated elements of the natural world that describe our relationship to nature. In the above artworks, Young incorporates intricate Islamic-style designs that have also been “borrowed” by mid-20th century American floor coverings and grill work. Here, the motif is re-elevated to the status of art and its original spiritual relationship to the world around us. 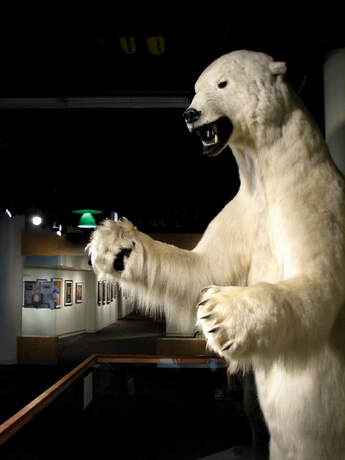