All Senses: The Art of Andrew Young​

Change is the subject and substance of Young’s art. Adaptation, rupture, accident, contact, renunciation, absorption, cultivation, repetition: alteration can occur through any combination of such physical and emotional forces. In more concrete terms pertinent to artistic process, a motif might recur until its significance is fulfilled and then disappear; a medium might be set aside and found materials taken up; a stray drip of paint could take on the shape of a flower; a shift in scale might lead to a redefined realism. “Battle within battle must ever be recurring with varying success,” wrote Darwin of the struggle for existence, “and yet in the long run the forces are so nicely balanced, that the face of nature remains uniform for long periods of time."7 Surveying Young’s work over some twenty years provides evidence of such battles and also an impression of continuity.
As a result of (and, ultimately, in conjunction with) the formal reversals described above, illumination attains a purely expressive rather than primarily descriptive function in Young’s tempera paintings. The evocatively titled works Two Lights Placed There and Light Pretending, both of 1994, directly address this transformation. The larger of the two panels, Two Lights Placed There, presents a marquetry-like design of ebony and amber tonalities, overlaid with strokes and streaks of ivory. In certain areas, the white medium coalesces into petals, brightening and virtually scenting the geometric architecture over which they hover and settle. Elusive yet palpable, these invented blossoms are radiant, gestural improvisations representing the principle of generation. One is irresistibly reminded that tempera is comprised of the yolks of eggs, symbolic of life and resurrection.
As Young recalls, about two years passed before paintings that explicitly reference his Pakistani experience “started to emerge,” motivated by internal impulse rather than external influence.10 In works made between 1995 and 1997, he tautened the relationship between structure and symbol, the interlocked means through which human beings lend order and meaning to their untidy lives and restless spirits. The polished, sectioned circles in the 1995 panel Music in Phrases [p. 12] seem significant but initially resist interpretation: they could be stylized rosettes, cross-sections of citrus fruits, fossilized diatoms, pie charts, targets, or clockwork cogs. However, their varied size, chromatic regularity, and indeterminate setting serve to undermine some of these hypotheses, as does the comparative naturalism of the superimposed white flowers. ​
In around 1997, Young’s artistic practice underwent a significant shift. Feeling as if he were “taking what he could carry” from one environment to another, he realized that to communicate his response to, and eventual acceptance of, his altered circumstances, he would need to reach for different materials and compositional modes.12 Instinctively, he began to make drawings on small pieces of paper, which he would grasp and fold as if seeking tactile, externalized reconciliation with an intensely introspective process. Although he had no specific purpose in mind for these personal notations—indeed, they would remain stashed in the pockets of his work clothes for an indefinite period—they ultimately led to a new body of work that continues to evolve today.13
As Modernist artists first discovered in the early decades of the twentieth century—concurrently with the publication of Peirce’s semiotic theories—collage creates new kinds of meaning by mobilizing all three types of sign. Pablo Picasso and Georges Braque used pieces of faux-wood-grained papers to rupture iconicity, exposing the pretense of resemblant representation. The Futurists cut up newspapers and reassembled the broken typography into jarringly nonsensical concrete poetry, dismantling and thereby reappropriating a symbolic code. And Jean Arp and other Dadaists created purely indexical art by scattering pieces of paper randomly on a surface, where they indicate nothing other than what they are.15 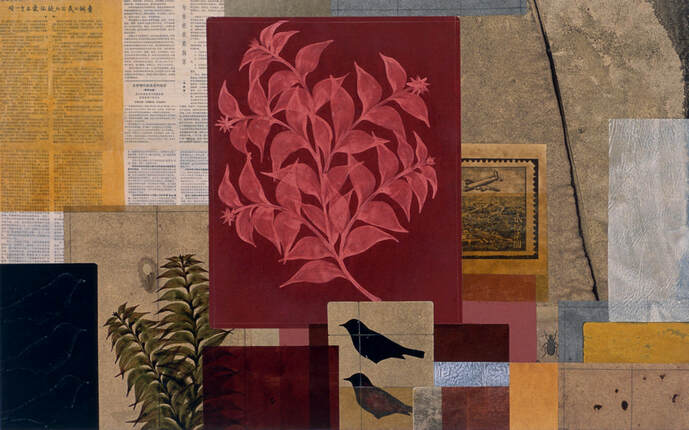 Greater and Lesser Lights series (c-208), 2001/2002
Collage of hand-painted papers, with Chinese text and stamp, on museum board, 25 x 39.25 in.
​A recurring reddish frond, about fourteen inches tall in c-208, measures four feet in one of the murals. Leaning over the sheet of rice paper with a loaded brush, Young practiced a technique related to that used by Asian sumi-ink painters, fanning a large brush against the surface and letting changes of pressure transfer the gouache to the page. Repeating at arm’s length the movements already familiar to his fingers, he could sense the integrity of his gestures but could not watch the motif emerging. Nor did he see the compositions until the point of their installation in the library in spring 2005, for he started with individual elements, such as the frond on rice paper, and then applied them to a total of twelve square panels, which were finally affixed to four thirteen-foot-long rectangular supports. With very little room for error, Young effected the adaptations necessary for his imagery to survive in a very different environment while preserving its essential characteristics.
See Exhibition Views
​         Full-color, printed exhibition catalogs are available with the above essay. Please contact the artist to inquire.
Catalogs for Sale
Return to Catalog Essays - Index